Free Shipping on orders over $35
Join the Coco Club for 15% off, forever!
Subscribe & Save! 17% off Subscriptions.
Previous
Next

Dr. Ginger’s Lets You Reap The Benefits Of Oil Pulling Without The Drawbacks

Okay, so you’ve heard how oil pulling has multiple benefits not only for your oral health but for your entire body. Impressively, it’s been reported to help with:

So, if you know this and you’re still not oil pulling, chances are you’ve heard about some of its not-so-great aspects. Or – perhaps you’ve tried it and – well – we don’t want to down anyone who’s an avid fan, but let’s face it – it’s an arduous, lengthy process! We’re about to go down the list of reported oil pulling drawbacks in order to help you make an informed decision about the practice and, along with the way, let you know about our favorite alternative.

Because Dr. Ginger’s Coconut products are formulated to achieve results in a much shorter period of time, the chances of inhalation are slim to none.

2. Thicker Mucus/Coughing: Since an oil pulling session is meant to last between 15 and 20 minutes, it can cause the mucus in your throat to thicken. Expelling it can mean either voluntary or involuntary coughing and, although proponents aren’t bothered by this, it’s a turnoff for others.

3. Upset Stomach: This can happen when highly contaminated oil is ingested, rather than inhaled, and can cause queasiness, loss of appetite, diarrhea, or even vomiting.

Unless you have an issue with swallowing large amounts of toothpaste or mouthwash, this isn’t a problem you’ll experience when using Dr. Ginger’s.

4. Dry Mouth/Increased Thirst: One of oil pulling’s big selling points is that it moistens the mouth by leaving behind a protective film, but for some the prolonged swishing action causes saliva to mix with the oil and be expelled along with the oil at the end of the session.

5. Painful/Stiff Jaw: The act of swishing a thick oil around in the mouth for 15 to 20 minutes can overwork the jaw’s muscles and ligaments, which can result in pain and stiffness.

Dr. Ginger’s products are no more taxing or painful to the mouth than normal brushing or gargling.

6. The increase of Cavities: The act of oil pulling, itself, doesn’t cause cavities. The problem starts when people substitute oil pulling for brushing and flossing. Oil pulling is meant to be supplemental to oral care, not as a replacement, so while it may help fend off harmful bacteria, it isn’t the best line of defense against cavities.

When used in conjunction with flossing, Dr. Ginger’s products are designed to support healthy teeth and gums.

7. Dangerous Heavy Metals: The steady rise in the popularity of oil pulling has caused an upswing in a number of manufacturers wanting to cash in, which means that the quality of one oil to the next can vary greatly. Some lower quality oils have been found to contain high levels of mercury, arsenic or lead, making it imperative to conduct brand research before buying.

Dr. Ginger’s products have no heavy metals (or anything else that’s harmful). In fact, you can see exactly what they’re made of by clicking here.

We’ll end by saying to all oil pulling enthusiasts, if it works for you, pull on! But if you’re worried about or have been subject to any of the difficulties mentioned above, you don’t have to forgo the many positive benefits of oil pulling practice.

Dr. Ginger’s Coconut Toothpaste and Mouthwash are for pullers and non-pullers, alike. For pullers, they’re a necessary and natural adjunct for supporting healthy teeth and gums. For everyone else, they’re a great-tasting, wholesome and advantage-packed alternative to everyday oral care products. “Welcome to Starbucks, what can I get started for you today?” – Starbucks Barista. “Hi yeah I would like a grande flat white…umm…with extra cream,

Before The Brand, And How It Came To Be

“Dr. Ginger, do you have any suggestions for natural toothpastes?” “Dr. Ginger, I was looking at coconut oil pulling for my gums, do you think 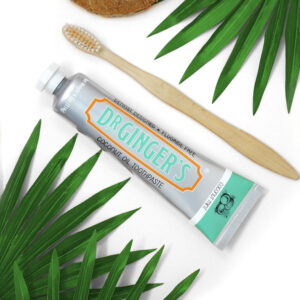 7 Tips To Better Your Mouth Microbiome

Your mouth microbiome (also known as “oral microbiome“) is complex. Second only to your gut,

Healthy Toothpaste For Your Oral Microbiome | 2022

Here at Dr. Ginger’s we find ourselves at the intersection of scientific and holistic practice—and The human body and your oral microbiome are miraculous things. Made up of trillions of